As we concluded our visit to Gaudí’s Casa Battló, we walked over to another one of his masterpieces—La Sagrada Familia. In 1882, construction on La Sagrada Familia began with its first architect, Francisco de Paula del Villar y Lozano. However, due to various disagreements and conflicts, Antoni Gaudí was asked to take over the job in 1883.

To give some background information about Antoni Gaudí, he was born in 1852 and died in 1926 a few days after being hit by a tram. Nobody recognized him since he appeared to be a “beggar” due to his clothes, so he did not receive the immediate treatment. By the time somebody recognized who he was, his condition had deteriorated, and he unfortunately passed away within a few days at the age of seventy-four.

Alongside the church is a museum that showcases the numerous stages of La Sagrada Familia’s construction. One of the walls in the museum highlights a quote from Gaudí (pictured below), and it has since stuck with me. The quote states, “We must all contribute, as it has to be the church of a whole people.” Even after Gaudí’s passing, construction of La Sagrada Familia has continued, and his dream for the church is still, to this day, becoming a reality. Its expected completion date is set for 2026, so there is much to look forward to!

People from all over the world come to see La Sagrada Familia, and both the beauty and spiritual energy that fill the church are truly incredible. There are no words to describe how breathtaking the church is—inside and out—and the fine details in every nook and cranny are immaculate.

The structure of the church is quite interesting. Once completed, “The design will be completed with four domed structures, some 40 metres high, sited at each corner: two sacristies on the northern side; and on the southern side the baptistery and the chapel of the Holy Sacrament and Penitence. These four constructions and the three facades will be linked by a wide, covered corridor, with a double wall, referred to as a cloister by Gaudí, which will insulate the central nave from noise from the street, and allow circulation from one building to another without the need to cross the main nave.

Gaudí’s plan was for a group of 18 towers: 12 shorter ones on the facades (bell towers which will be 100 metres high, representing the Apostles), and six taller ones in the centre in a pyramidal layout reflecting the hierarchy of their symbolism. Of these, the tallest will be the one above the central crossing, representing Jesus Christ, reaching 172.5 metres in height. It will be surrounded by four, slimmer, 135-metre-high towers representing the four Evangelists and their Gospels. A further tower will cover the apse and will represent the Virgin Mary.

Gaudí wanted to construct a building that would make an impact on the skyline, but also show his respect for the work of God, which in his opinion should never be superseded by man: at 172.5 metres tall, the Sagrada Familia is one of the tallest religious buildings in the world but remains a few metres below the height of Montjuïc—the highest point in the municipality of Barcelona”(http://www.sagradafamilia.org). 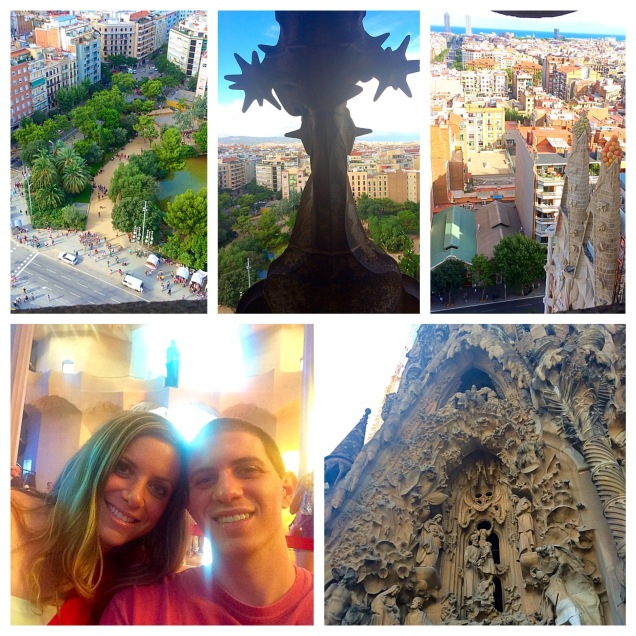