After lunch, my sister and I reserved a time slot to visit Casa Battló—another incredible building designed by Antoni Gaudí, which is located near the center of Barcelona.

Between 1904 and 1906, Gaudí designed and built Casa Battló for a wealthy man by the name of Josep Batlló. Battló lived in the bottom two floors with his family, and rented out the remaining floors, which were used as apartments. As you can tell by looking at the pictures, Gaudí used colors that can be found in nature, but more specifically, marine life.

The outside of the building is designed to look like it is made from skulls (which are the balconies) and bones (which are the supporting pillars for the building). The roof is designed to look like a dragon, and as you walk around the exterior and see the different angles of the house, you’ll notice different colored tiles on the roof. These are meant to represent the scales of the dragon’s spine.

As you walk inside the house, the shapes and colors of the rooms and features are constantly changing. There is something to be seen everywhere you turn. The railing for the staircase is meant to fit the palm of your hand, as are all the door knobs inside the house. The banister itself represents another spine of a large animal. With incredibly large ceilings, Gaudí shaped each skylight like the shell of a tortoise, and made sure that there is an even distribution of light throughout the entire house.

This can be noted in one of the pictures below where the tiles from the bottom floor going up start off as a light blue. As you continue walking upstairs, the tiles become increasingly darker. There is also a glass casing on each floor by the staircase that provides a special effect. So, when you look at the blue tiles through the glass, it seems as though you are underwater, and the different shades of blue really accentuate this. And as if the inside of the house wasn’t beautiful enough, the various views of the city that can be seen from the rooftop are also stunning.

Below, you’ll find a video provided by Casa Batlló that shows the house come to life, as Gaudí originally imagined. It is truly a spectacular piece of art, and besides being a historic and fascinating staple for Barcelona, it is also a UNESCO World Heritage Site. 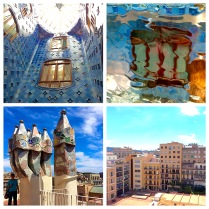 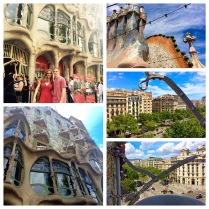 After a day’s worth of cooking, baking, and eating, it’s finally time to sit down and write! It’s nothing we don’t already know—Thanksgiving is a time to share with loved ones and really think about what we are grateful for in our lives. Whether it’s knowing that we have a roof over our heads, food on the table, health, safety, security, a bit of financial stability, loved ones who care about us, the ability to receive an education, or even freedom in the very country we live in, there is so much that we can all find to be thankful for.

Throughout these last few days, weeks, months, and years, I have become increasingly thankful for simple treasures, and these treasures are all of you. Knowing that there are people reading what you put out there is a true honor and privilege, and I could not be any more grateful for fellow bloggers and readers who continuously support both me and my writing, day in and day out. However you decide to spend your Thanksgiving, I hope it is a wonderful one surrounded by those you love and filled with countless blessings.

We shouldn’t limit our thankfulness or gratitude to one holiday each year, so here’s hoping we can each learn to be more thankful and appreciative in the upcoming year. Happy Thanksgiving to all, and know that we made it! The cooking is past us, the cleaning is over, and now it’s just us and leftovers. Talk about being appreciative!