Yesterday, I wrote about Boca Azul in Cartagena, Colombia. Boca Azul is supported by Foundation Casa Italia, and it is a school in La Boquilla that serves more than 300 of the poorest children who are in the need of the most help. The children who attend Boca Azul are between the ages of 1 to 14 years old and receive a full-time education, school support, one meal per day (which makes this the only place in the city for children to receive a free meal), first aid and medical attention, and after school activities. While taking a tour of Boca Azul, some of the students put on a show for us, and as you can see based on the picture below, they performed traditional dances of the area. The students pictured below are some of the most hardworking students in the school with the highest grades, and as a reward, they are able to learn the traditional dances. They took so much pride in their performance, and as you can imagine, it was a beautiful sight to see.

The Children of Boca Azul

In 1986, Mami Leo answered a call from God to pack her belongings and move to Guatemala to help abandoned, abused, and malnourished children. With $2,700 raised by her and her prayer group, and faith that the Lord would guide her, Mami Leo devoted nearly thirty years of her life living in the mountains, nourishing, educating, and loving countless Guatemalan children in need. For the past few weeks and remainder of the month, I’ll be highlighting many of incredible accomplishments that helped countless children in need, all thanks to one valiant and dedicated woman, Leonor Portela.

In 2001, the Emmaus Medical Mission group first started its biannual trips to Guatemala from Miami. The Emmaus doctors and volunteers treat a few thousand people each mission who have never before received medical attention in their lives. Mami Leo convinced a well-respected doctor from Miami who at the time was leading medical missions to other countries to bring his group to Guatemala because there were so many people in need of medical assistance. This doctor complied, and has since been bringing his Emmaus team to Guatemala twice a year for fourteen years now. Because of Mami Leo’s dedication to serve the people of Guatemala, thousands of Guatemalan citizens have received medical care ever since.

In 2003, a nutritional ward for malnourished children was started. Nourishment is provided to each child until they have fully recovered. Parents of children outside of the home are provided with a follow-up nutritional program that teaches them how to best feed their children with the available resources. As you can see from just one example in the picture below, the nutritional ward has positively impacted the lives of so many children. And again, this is yet another program that Mami Leo implemented to give children in such terrible, and often times deadly conditions, a chance at life.

Jose Martin, One of the Many Children Who Benefited From the Nutritional Ward

As explained in a prior post, last week during the medical missionary trip I attended in Guatemala, I worked in the triage team, where we took down the names, ages, and information of each person who walked into our makeshift clinic. We then took their blood pressure as well as their blood sugar levels. The people of Guatemala, especially those from Sumpango, Sacatepéquez are some of the kindest, most humble people you’ll ever meet, so it was a pleasure being able to meet as many of them and their family members as possible. A few of the cases from various patients that we saw included ones with TB (tuberculosis), one kid had partial liver failure and a kidney dialysis tube which had been inserted into his stomach seven years prior, people with masses on various body parts, lots of patients with scabies, urinary tract infections, worms, and/or h pylori bacterial infection, people with blood sugar levels over 500 (one woman’s blood sugar level was so high that both times I took it, the machine couldn’t even provide a number since the number was beyond recognition), and other such illnesses as well; not to mention, the line for our one dentist was filled with people needed teeth removed due to the lack of dental hygiene.

One woman in her early twenties sat down at my table with a black eye and explained to me that she had been trying to reach something in her cupboard, but it fell and hit her in the eye. As I have learned on previous missions, spousal abuse is quite prevalent in Guatemala, and when numerous husbands get their hands on alcohol, they turn to physical abuse on those closest to them, which are usually their wife and kids. We tried to help this girl as best we could by offering her medicine to soothe the pain, but more importantly by telling her to stay strong and to try her husband, should this ever happen again. As unfortunate as it is, this tip of advice is much easier said than done, and there are some things we just aren’t able to fully help in the course of a few days. However, on a more positive note, a grandma and her grandson who lived with her walked in, and upon explaining that I would need to take the grandma’s blood sugar level, the grandson immediately held her hand. I couldn’t wrap my head around how much love these people had for one another, and even though he heard firsthand accounts of terrible stories involving abuse (which are difficult for us to work with when there are no mental health counselors on the trip), the love that family members shared for one another was far more powerful than any type of abuse could ever be. After two full days of seeing well over a thousand patients and providing medical attention to those in need, even though people were waiting in line for hours upon hours, they were still kind and beyond gracious for us being there to serve them.

I have been receiving comments recently saying that the work I have been doing in Guatemala is amazing and I have really impacted the lives of those we treated. However, in my opinion, it is the complete opposite. From attending these medical missions and getting involved with the orphanage we stay at during the trips, the people of Guatemala have taught me so much about the world and about myself that I feel as though I am forever indebted to them for leaving such a positive impact on my life. We are often so closed off to the world around us and to those in need who are right beside us, as we tend to become easily engulfed in our own personal problems. Who can blame us though? Life happens and  unexpected occurrences take place, which usually catch us off guard, so it’s difficult to find time to worry about anyone but ourselves.

What I love about these missions though is that twice a year, I am given a reality check and shown what is truly important in life, and that the world doesn’t solely revolve around me. There is much more out there than we realize, and there are so many people in need of our help, but when we all come together to help those around us, our collective efforts really do make a difference- just like on these medical missionary trips. We each have our own talents and skills that we can use to help those in need, and while I wasn’t able to provide medicine to the people we treated (seeing as this is a skill and talent that the doctors have worked hard to achieve), here I am writing about my experiences to try and spread the word and raise awareness. So you see, we each bring something valuable and unique to the table, and we can all be the change we want to see, but it starts with us. 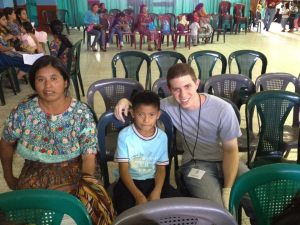