Since Spring Break has arrived (at least here at the University of Central Florida), I decided to post something fun and mood-lightening. Hope you all enjoy it and have a great remainder of the weekend 🙂

Mother Goose told a lie, for she’s really a hen,
She did this to attract the attention of men.
Humpty Dumpty didn’t fall off of that ledge,
He was frightened by a gardener, mowing a hedge.

Peter Piper didn’t choose to pick the pickled peppers,
He was threatened by a group of big dancing steppers.
The ants march together, and reside on their hill.
Not one by one, though; it was just a fire drill.

Working on the railroad was a mere second job,
Suggested by my unemployment clerk; his name was Bob.
The eencey weencey spider had no encounter with the rain,
He was evicted from his household web for being such a pain.

Little Bo Peep didn’t really lose her sheep,
She was tired from partying, and just fell asleep.
Jack didn’t fall as he tumbled down the hill,
He had a girlfriend on the side, and was pushed by Jill.

Everyone has stories to cover up their flaws,
But when the truth is revealed, you need a moment’s pause.
Don’t be naïve and believe all that you hear,
Because without both sides, the story’s never clear. 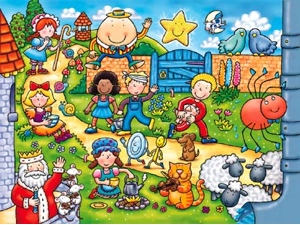