“Whatever you want in life, other people are going to want it too. Believe in yourself enough to accept the idea that you have an equal right to it.” -Diane Sawyer

Upon waking up in the morning, we drove directly to the airport as we made our way to Cartagena, Colombia. On our way, we were told that Bogotá has one percent of all the gyms in the world. As a health conscious city, Bogotá also has what is called Ciclovía every Sunday. From 7am-2pm, many of the streets are closed for people to do exercise such as biking, walking, or running. As we drove to the airport, we saw countless individuals bicycling and running along the streets. It was fascinating to see the government support such a great idea.

After a short flight to Cartagená, it was time for us to learn more about the city as we drove to our hotel. Hotel Carribe, the hotel we stayed at was built between 1945-1950, and was the first hotel built in Cartagena. More recently, it is famously known for a scandal involving President Obama’s secret service. Before President Obama arrived to Cartagena a short while ago, his secret service (who were staying at Hotel Carribe) were caught fighting with prostitutes regarding their costs.

As is the same in Bogota, all males must go to the army to receive 18 months of military experience upon graduating from high school. The only exceptions are if the individual is disabled, married, has children, or is continuing with his studies by attending college. Otherwise, the individual will receive a fine (with the amount depending on his social class) and he risks the possibility of a legal kidnapping in which the military can find and bring him to their station to enlist him.

Cartagena has been said to have the third most important port in all of South America after Brazil and Chile. Tourism is the next biggest source of income in Cartagena after the port. In one cruise alone which docked just a few weeks before our arrival, between $400,000-$500,000 was made in emerald sales alone. Restaurants and hotels also bring in a fair share of money from tourists as well, but emerald sales are a big hit with the tourists as well.

One of the entrances into Cartagena is named Boca Grande because of how big it is. Walls throughout the city once protected Cartagena from pirates due to a significant amount of pirate attacks years ago to steal treasure and merchandise.

After learning a few interesting facts about the city, we arrived at the hotel to drop off our belongings. As we arrived, we were greeted with fruit cocktails before the start of our city tour. 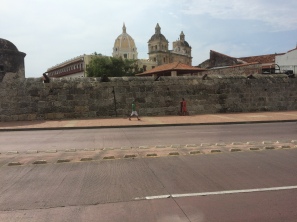