In 1986, Mami Leo answered a call from God to pack her belongings and move to Guatemala to help abandoned, abused, and malnourished children. With $2,700 raised by her and her prayer group, and faith that the Lord would guide her, Mami Leo devoted nearly thirty years of her life living in the mountains, nourishing, educating, and loving countless Guatemalan children in need. Throughout the past month, I have been discussion the incredible milestones that Misioneros Del Camino has accomplished thus far. As the story continues, we pick back up in 2011.

As you might remember from a previous post, in 2006, a neurological center was established on site, providing care and numerous therapies to children with various neurological disorders such as autism, Down syndrome, intellectual disability, cerebral palsy, and many more. In 2011, an expansion on the neurological center was completed in an effort to provide service to more children than our current facilities would allow. The expansion was devoted to both occupational and sensorial therapy.

Occupational therapy consists of teaching children everyday skills from getting dressed, to writing and more. Sensorial Therapy deals with sensory issues such as not being able to eat certain types of food, not being able to stand in a bright room, and more severe issues like the inability to sense hot or cold and high sensitivity to touch. To put this into perspective, imagine if someone touched you and it felt as though thousands of ants were crawling on you. Many children with Autism and sensory disorders cannot even be hugged or touched by their mothers because of such sensations. But thanks to the generosity of such great supporters, more will children will be able to hug their mothers and accomplish ordinary tasks that we would normally never even think twice about.

One such child who benefits from the therapies offered at the neurological center is Darlin, who is pictured below being carried on her mother’s back. She is four years old and has cerebral palsy. They live in a very poor village about 20 miles from the Neurological Center. To bring Darlin to therapy, her mother has to carry her daughter on her back to take a bus that leaves her about 5 kilometers from the Center, and then she walks the rest of the way with her daughter on her back. To return home, she does this again. She has been doing this since 2011 to help her daughter. Darlin has made fantastic progress! She is starting to take her first steps and is saying a few words. Hers is a long road, but there is hope. A few short years ago, she would not have had any hope or access to help, but thanks to the Neurological Center, that is no longer the case.

Expansion at the Neurological Center

Some of the Various Therapies at the Neurological Center 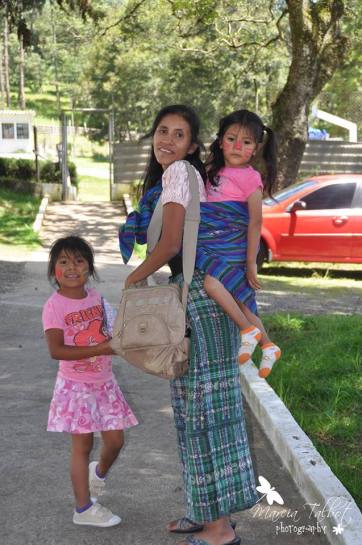 Darlin and Her Incredible Mother