In case you find yourself confused or worried by the end of this blog post (which I highly doubt), I’ll be putting my travel blogging on hold for a week, so that I could write about another important matter throughout the course of the next few days.

I decided two months ago that I was going to sign myself up for the Miami Half Marathon, with hopes of raising money and awareness for an orphanage in Guatemala during the process. You see, I volunteer on medical missions to Guatemala twice a year (I’ll explain more about the trips in future postings), but during the missions, we stay in an orphanage that houses over one hundred children who have either been abandoned, neglected, abused, or children who have neurological disorders whose parents could not afford to take care of them. There’s a neurological center on the premises, which provides various therapies to over 175 children, both from the home and from neighboring cities. Some of the many therapies include, speech therapy, occupational therapy, psychological therapy, physical therapy, sensorial therapy, and other crucial therapies.

After the last mission trip in November, we were asked to participate in the Miami Half Marathon in an attempt to raise money and awareness for the cause. I signed myself up for the race, and began training immediately after. I stepped onto the treadmill, for what must have been the first time in over three years, and couldn’t wait to step back off. By the middle of my first week training, I came across a half marathon schedule that beginning runners could follow. I started posting about my endeavor and provided a link where friends and family members could donate on my social media accounts. Within minutes, I had friends commenting saying things along the lines of “What are you doing running a half marathon? Or even running at all…” and other such encouraging  statements. I had to put their jokes aside and remember what I was running for. By the end of the first week, I had completed 17 miles, and by the end of the second week, I had run 21 miles. It was stories like the following one that helped get me through these first two weeks of training.

Meet Peter and Paul, two twin brothers pictured below who arrived at the home April 4, 2008. At 6 months of age, both of them suffered from severe malnutrition, pneumonia, and cardio insufficiency. They spent the next 6 months in and out of the local hospital with respiratory infections and in constant need of oxygen. As they began to gain weight and get stronger, their infections began to subside and their hearts grew stronger. Paul recovered much faster than peter and within 3 months, he no longer needed oxygen. Peter however needed oxygen for more than 6 months and would turn blue if kept off for only a few minutes. Today at age 6 and-a-half, they have made full recoveries and show no signs of heart problems. They are very healthy, playful (if not somewhat mischievous), and beyond loving. Throughout the next week, I will be posting miraculous stories that show just how incredible Misioneros Del Camino is. Stories like that of Peter and Paul are what have been motivating me to train for this upcoming Sunday’s Half Marathon, and they are the reason why I continue returning to Guatemala year after year. If you would like to help contribute to this incredible cause so that more children like Peter and Paul can be helped, please feel free to click on the below link. And if you would like to learn more about Misioneros Del Camino, please feel free to clink on the bottom link. 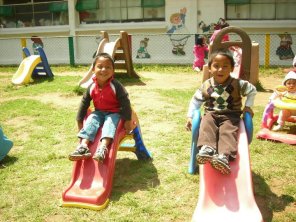 2 comments on “Half Marathon Training Weeks 1 and 2”